Launched by SES Techcom in 2018, this platform leverages the unique advantages of satellite to deliver a reliable, globally-available cybersecurity system. The next generation communication infrastructure generates encryption keys in space, and securely transmits those keys to users on Earth via laser. The project aligns with SES Techcom’s commitment to providing innovative, game-changing solutions to today’s cybersecurity challenges.

The Quantum Key Distribution (QKD) system will include core technologies and ground end-to-end testing to address the needs of users such as institutions and governmental organisations, telecommunication operators, financial organisations, infrastructure providers. QUARTZ is backed by the European Space Agency (ESA) and developed by an SES-led consortium of research organisations, universities and leading industry representatives including: 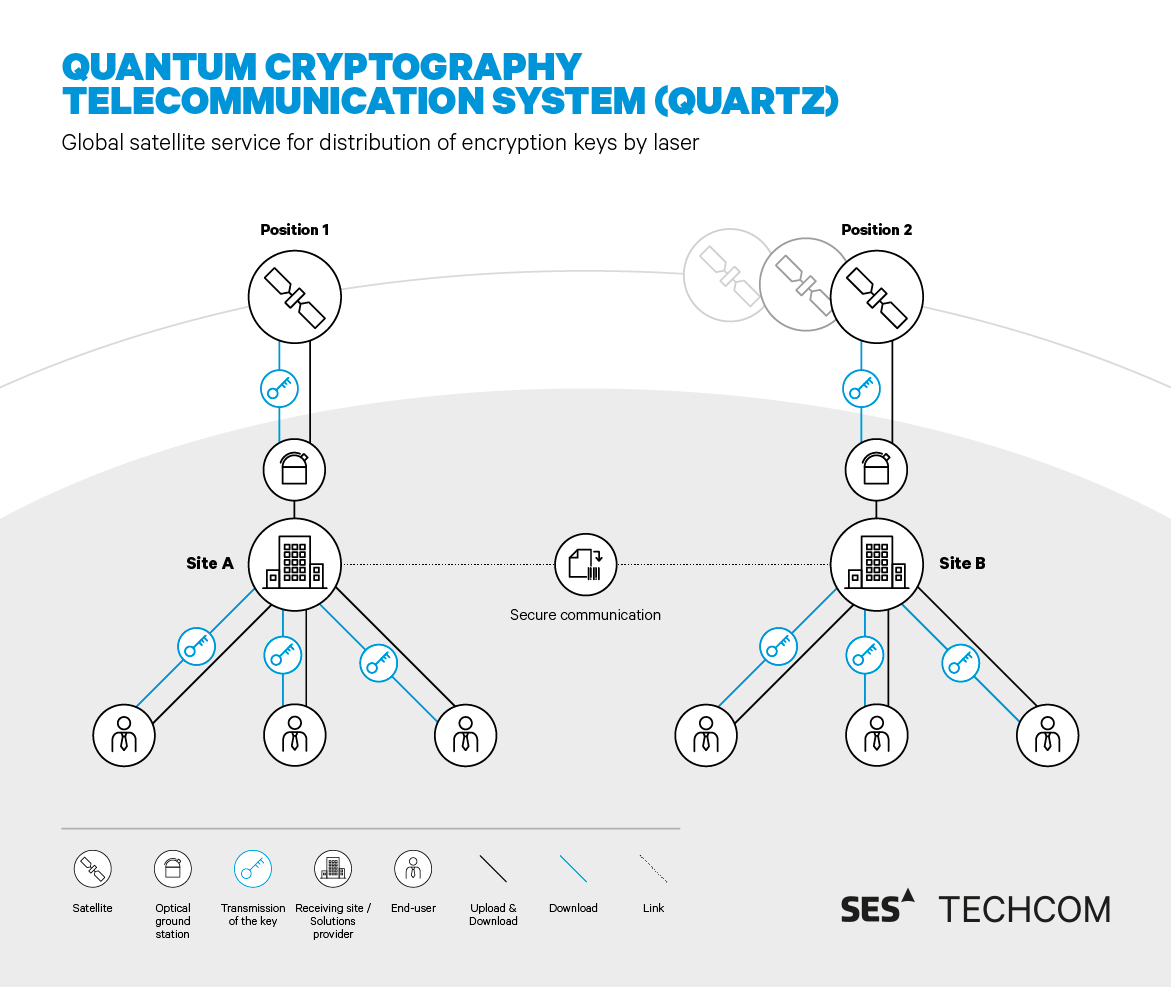 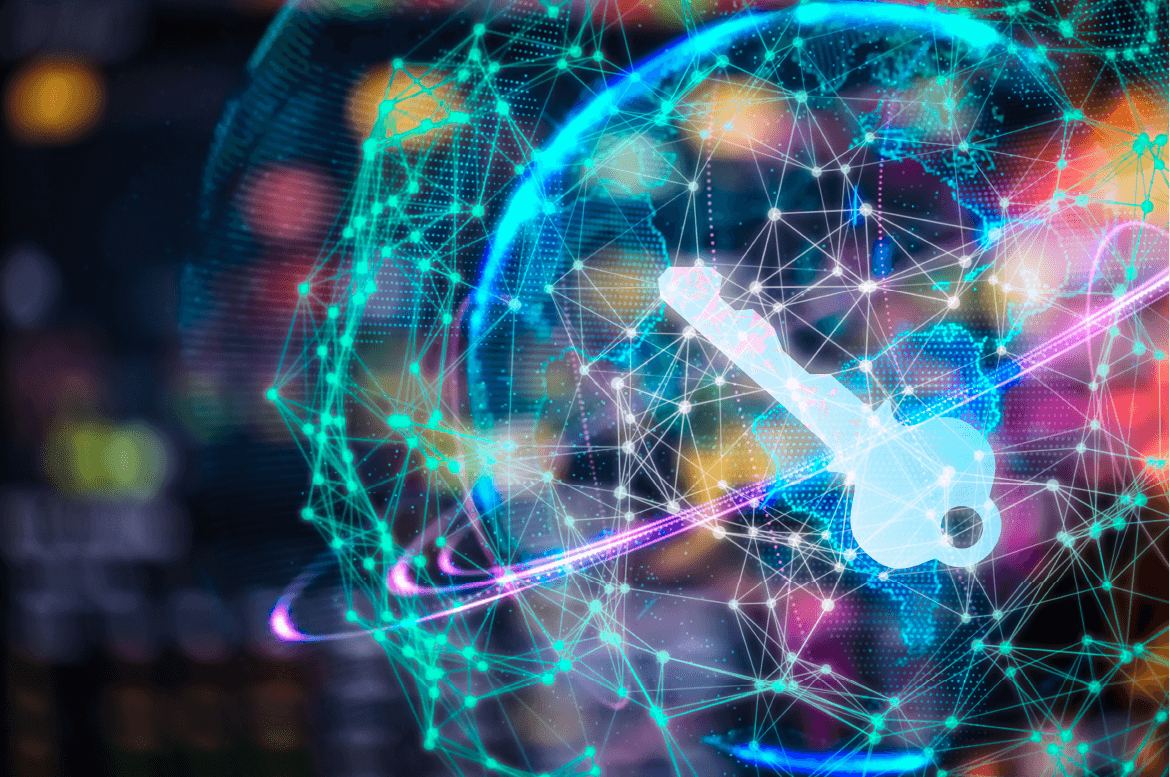 In overseeing the project framework, SES Techcom guides the design and development of the QKD and end-to-end service architecture and will lead the future service of its core technologies with a particular focus on EuroQCI service provisioning.

SES Techcom was involved in the QCI4EU study, a European Commission project, with a leading role in the user requirements definition and contribution to the overall system design.

SES Techcom is leading, together with strategic Luxembourg partners, a study to shape the future Luxembourg Quantum Communication Infrastructure, including the interface with EuroQCI to enable cross-border secured communications.

The programme assists in securely operating response missions which may not be able to rely on the traditional networks or may be subject to cyber threats, with four main use cases: 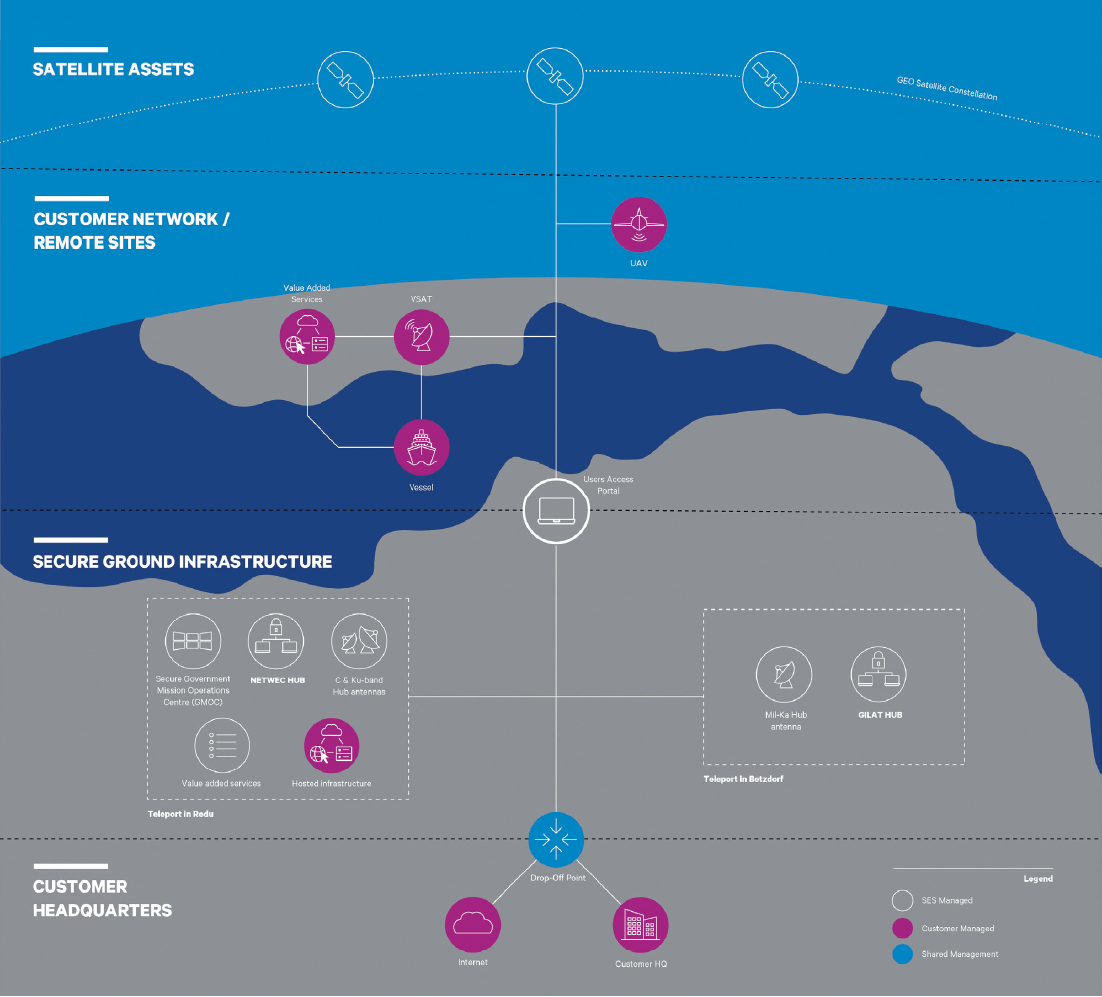 • Crisis management
Including civilian and military by Common Security and Defence missions and operations, natural and man-made disasters, humanitarian crisis, and maritime emergencies.

• Border Surveillance
Including sea, air, land and pre-frontier surveillance. Monitoring and control of external or “green” borders. Detecting and tracking approaching vehicles and groups of people.

PACIS-1, the precursor programme for GOVSATCOM, is led by SES Techcom and backed by a European consortium of industry partners in an agreement signed by the European Space Agency (ESA). The new satellite communication platform for governments aims to make secure satellite communications accessible and available to governments and institutions. This is the first step in demonstrating how such a partnership could leverage governmental and commercial satellite services to ensure instant access to required communications channels when and where needed at commercial rates, with resilience to failure or attack. The new service model introduces the innovative concept of pooling and sharing commercial and military frequency bands, along with ground segment resources and service management mechanisms. It includes measures such as automated or semi-automated anti-jamming mechanisms, and response-to-stress systems.

This public-private partnership between SES, the European Space Agency, and other organisations provides a range of services, including engineering, satellite capacity, commercial, and project management. Other industrial partners that have joined the SES-led consortium are Redu Space Services, Newtec, QinetiQ, LuxGovSat, and Tekever. SES Techcom will put in place the architecture and service concept of PACIS-1, leveraging the space assets and ground infrastructure of the project stakeholders.

The use cases and applications for satellite navigation systems are vast, from smart cities and big data to next-generation logistics and the Internet of Things (IoT). With over a decade of experience providing satellite navigation infrastructure and services, SES Techcom has frequent opportunities for hosted payloads and a global network to enable the delivery of PNT (Positioning, Navigation and Timing) downstream applications. SES Techcom supports diverse navigation solutions around the globe, from operations support and mission-critical networks to tracking, telemetry and ground stations.

SES Techcom helps to extend the coverage of service from Europe to its neighbouring countries. It supplies two commercial payloads for the European Geostationary Navigation Overlay Service (EGNOS), which provide European navigation services alongside the American GPS and the Russian-led GLONASS systems. Both tailor-made payloads operate in the L-band to help verify, improve and report on the reliability and accuracy of positioning signals in Europe.

SES Techcom has played an important role in the design, development and deployment of the Galileo system, Europe’s Global Navigation Satellite System, since at least 2010. This is a highly accurate global positioning service for public, governmental and commercial use. It provides ground infrastructure design and deployment, such as Tracking, Telemetry and Command (TT&C) antennas, In-orbit Test (IOT) systems and VSAT network. 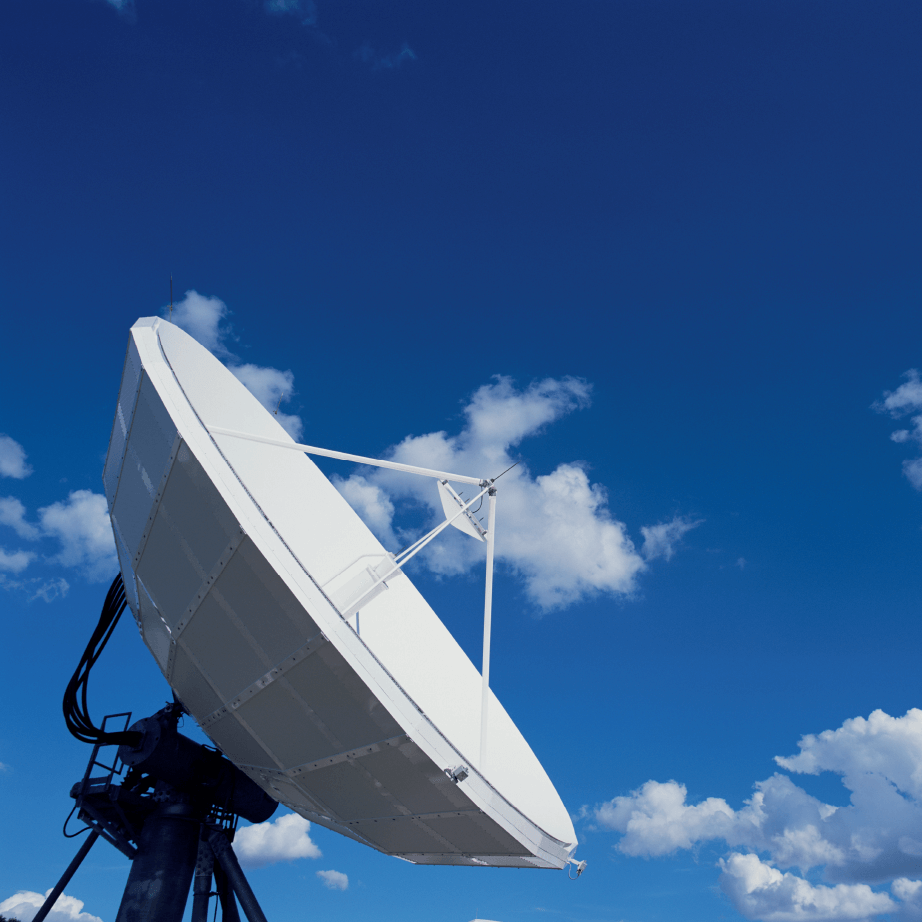 Currently, SES Techcom provides a series of services under a long-term agreement, including:

Under a similar framework, SES Techcom provides a highly redundant and secured VSAT network for the Galileo Data Dissemination Network (GDDN), including:

In addition, cybersecurity expertise and services are provided for the above activities.
Galileo is a European Union Programme, managed and developed together with the European GNSS Agency (GSA) and the European Space Agency (ESA). SES Techcom is instrumental to the deployment and maintenance of the GDDN. Previously, SES Techcom has provided infrastructure and services for the Galileo program, as well as ground stations and in-orbit testing during the In-Orbit Validation (IOV) Phase.

SES Techcom is committed to developing innovative solutions for e-health and disaster response. It has executed on this mission through its emergency.lu programme, a mobile, satellite-based telecommunications platform dedicated to disaster response. It was created to re-establish communication (Internet, phone) after a disaster, to support the coordination efforts of humanitarian organisations in the field and to contribute to saving lives during humanitarian emergencies. When disaster strikes, equipment and personnel can be deployed to the affected area by LearJet in less than twelve hours. Communication services can also be provided in the context of chronic crises, especially in very remote areas. Founded in a strong and trustful partnership with the Luxembourg Government, emergency.lu is a collaboration with a consortium of Luxembourg companies and organisations and is the de-facto UN standard for disaster response communication solutions. 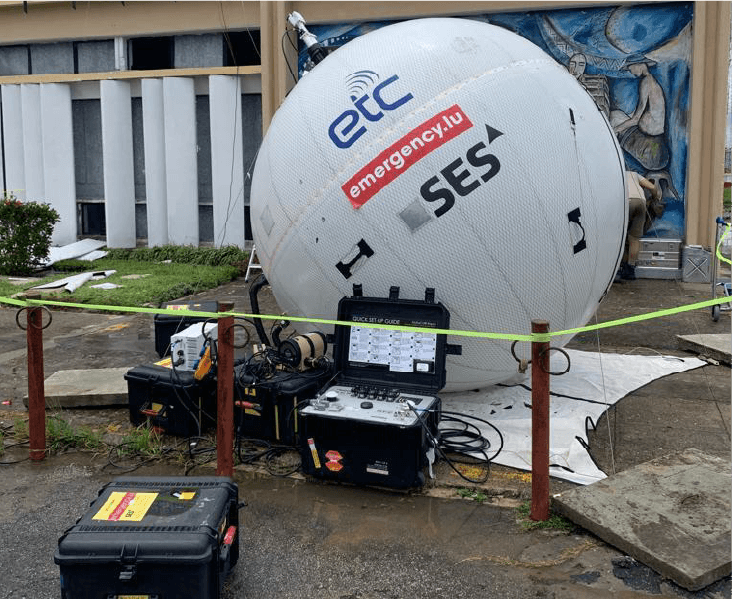 Solutions for the global health community

SATMED, a satellite-enabled telemedicine platform to manage connectivity, is the medical arm of emergency.lu. The goal of the service is to provide mobile health solutions in remote and underdeveloped areas, particularly to support regional development programs and humanitarian operations. It’s open, easy-to-use, readily available and accessible anywhere for use by non-governmental and governmental organisations, hospitals, medical universities and global health institutions.

See more about SATMED in this video.

Tailored by the expertise of non-governmental and governmental organisations, together with the innovative technologies of leading universities and IT companies, SATMED answers the critical needs of the global health community. The cost of software and secure data management, poor interoperability between IT solutions, and limited availability are just some of the barriers to using health IT applications in remote areas. SATMED overcomes these barriers by integrating within a single sign-on, web-based platform which includes a full range of capabilities. It offers cloud data storage, compliant with European data protection regulations, teleconsultation, teleradiology, health information systems (including analytics and epidemiology), virtual consultation, e-learning and electronic medical record systems. Healthcare professionals can connect using a desktop computer or handheld device equipped with a web browser and Internet connection. Remote or under-served areas that lack a reliable terrestrial Internet connection can access high-quality satellite broadband connectivity provided by SES. Once connected, users can access any platform feature without the need for additional IT infrastructure.