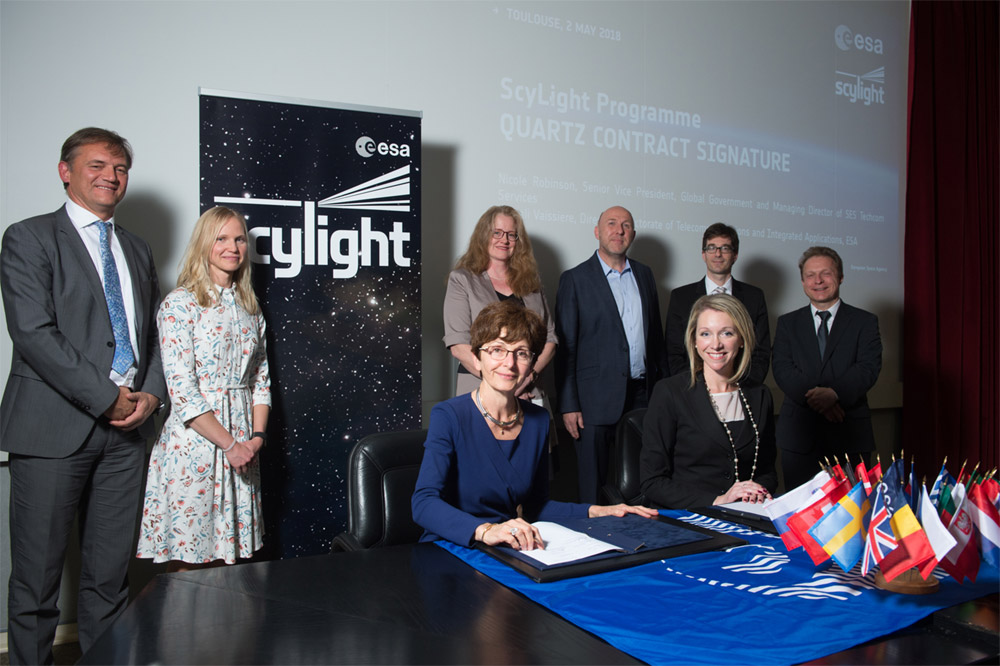 Luxembourg, 3 May 2018 – The European Space Agency (ESA) and an SES-led consortium are developing a system that will allow the generation of encryption keys from space, as well as their secure transmission to users on Earth via laser.

Under the agreement with ESA, the SES-led consortium of industry partners will establish a Quantum Cryptography Telecommunication System (QUARTZ), a new platform aimed at providing a global service for next-generation encryption keys for use in geographically dispersed networks. Possible applications will address the needs of users such as telecommunication operators, financial organisations, infrastructure providers, institutions and potentially governmental organisations.

In the framework of the QUARTZ project, SES will define, design and develop a satellite-based Quantum Key Distribution (QKD) system and service architecture, which includes the future service and the core technologies up to ground end-to-end testing. Other members of the consortium will provide specific technological contributions and expertise for various elements of the system, and will include companies and research organisations from ESA member states such as Germany, Luxembourg, Austria, Switzerland, the Czech Republic and The Netherlands.

Thanks to its reach and unlimited coverage, satellite can be a key element in achieving a reliable, globally available cybersecurity system. The QUARTZ project is an important step towards an innovative, robust, scalable and commercially viable satellite-based QKD service. It will enable the generation of encryption keys by secure laser links from satellite to users on the ground via a laser terminal for optical communication, as well as photon transmission for the quantum keys.

QUARTZ is a project developed under the umbrella of ESA’s new ARTES / ScyLight programme called SeCure and Laser communication Technology, in a dedicated Programme Line for Quantum Technologies. ScyLight was created by ESA as a dedicated programme to foster and support the development and deployment of innovative optical technologies for satellite communication as well as to assist industry in developing new market opportunities for optical communication technologies.

Mathias Link, Deputy Director of Space Affairs at the Luxembourg Ministry of the Economy and current Chairman of ESA’s Satellite Communications Board (JCB), supervising the ARTES programme, said, “It is an honor for Luxembourg that SES is leading this important project involving a large number of international players, as well as Luxembourg companies. The QUARTZ project further enhances the Grand-Duchy’s position as an ideal location for managing innovative commercial projects both in advanced space technologies and in data encryption.”